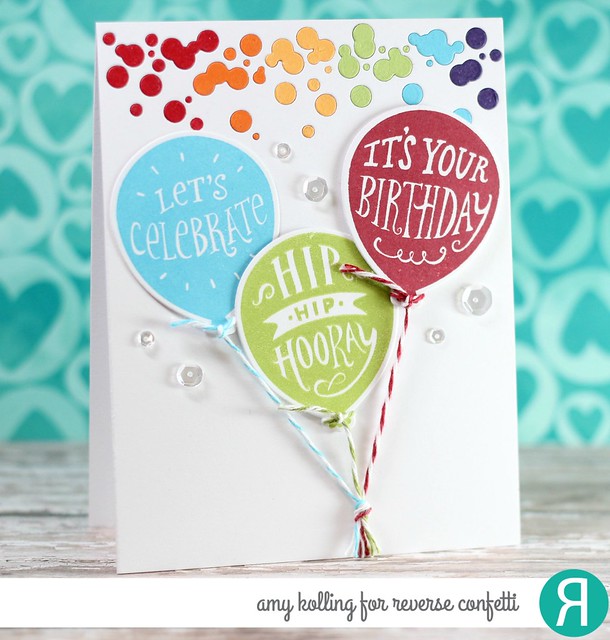 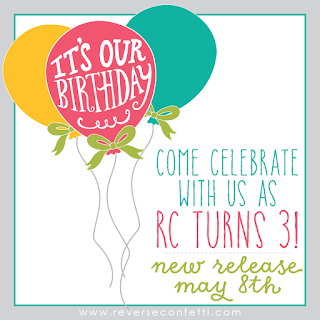 I started my card by doing a little "inlaid diecutting" which is such a fun technique!  Yes......I pieced all those circles back in the holes!  I had placed a piece of adhesive cardstock down and then laid the Falling Confetti die cut panel over the top.  By using some Press 'n Seal to pick up my circles, placing them in all the holes was simple!  The balloons, from Boxes 'n Balloons, were stamped with pigment inks and die cut with matching dies.  Some twine (from Timeless Twine) and Sparkling Clear Sequins (from Pretty Pink Posh) were added as final touches. 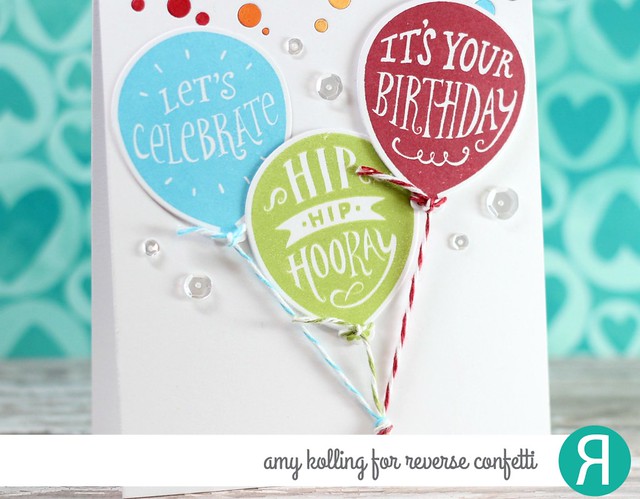 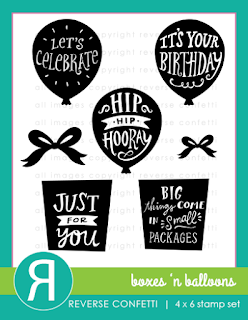 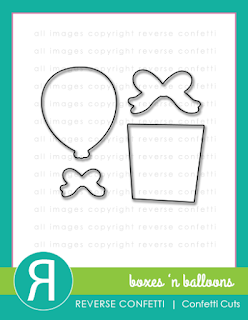 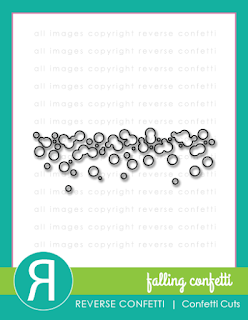 Now for the prizes..........there are THREE $30 prizes up for grabs this release:  3 for blog commenters and 1 for Facebook commenters.  So leave those comments and make sure to check the Reverse Confetti Facebook page too!

Details can be found over on the Reverse Confetti blog for all the prizes!

Thanks for sharing a part of your day with me!

Love the colors you chose. Very cute and festive.

Love your card and the fun balloons! Thank you Amy.

How super fun! Love what you did with the Falling Confetti!

Love the colors!! The confetti die wasn't even on my radar, but now I might have to get that one too!!

Love the rc sentiments squished in the balloons

Love these balloons and the fun falling confetti!!!

You cannot lose with balloons!

Super colorful and fun card! Love the colors you placed in the Confetti!

fun card.
Like how you reversed the colors between
the balloons and the confetti at the top.
thanks for sharing.

Yup, you did it again! You have the patience of a saint to do the multi-colored confetti. Fantastic card!

Oh I just love that confetti die and the inlay!

Love the bright colors of this card! Birthday bash is on my list!!! Love it!

Really cute card, Makes you want to have a Birthday! Such a fabulous release.

Such a fun card Amy!!! Love the different layouts of the card!!!!

Love the fun colors and your card.

Love the balloons with the confetti! Great colors!

fabulous design... love the way you inlaid the confetti!!

Great idea to do the inlay on the confetti die! Love this card, Amy.

Love your work. These are great products!!

well that took a bit of time to inlay all those fun colors. good work.

Wow, that's amazing! All those confetti pieced back in!! Great work :)

Love the different colors of confetti!

I love your ballon bouquet. So fun and cheerful.

SO FUN! Love the colorful 'bubbles'!

Love the multi-colored confetti, such a fun look.

This confetti die is fantastic- I love how you did the inlaid look.

What a fun card!

Festive card! Love the fun balloons and the confetti! Fabulous release... lovin' it all!

Loving the new release and super love stamps with matching dies. Great cards. Happy Birthday! Thanks for sharing your ideas.~Kim Klinkovsky at My Kraft Kloset

Oh I have to have those balloon stamps and dies! Great card, Amy!

Love it!!! So bright and cheerful. Thanks for sharing it.

So festive and fun.

I love the style of these cards!

I freaking LOVE this card and those balloons ROCK!