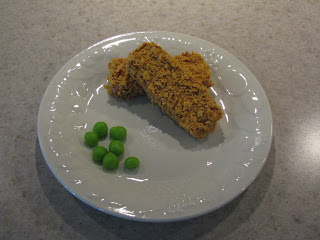 This has nothing whatsoever to do with stamping but I played a little trick on my kiddos for supper tonight! I made faux "fish sticks" and "peas". I told them to try it even though my son said, "It looks like a granola bar and it smells like one." Hehe. He wouldn't even touch the peas (I should have known better because I've never made peas before because I don't even like them). Anyway, I copied the idea from Family Fun magazine I received in the mail the other day. The "fish sticks" actually were pretty good!! Now, once they had tried them, we told them, "April Fool's" and said we were going to Qdoba for dinner instead!! We love eating at Qdoba on Weds nights because kids eat free with adult meal. Anyway, here is my April Fool's dinner--Enjoy!!!
Posted by Amy Kolling at 10:16 PM

Amy, That's so fun! I fooled my kids too! But, we didn't go to dinner, I actually made them eat their cupcakes and kool-aid. Ha ha!
http://the303griffiths.blogspot.com/2009/04/april-fools.html
Jewels

OMG! I had no idea there was a Qdoba in Topeka! I love that place! Everytime we go to Colorado we have to eat there! We sure need one here!!