SSS: This is The Life

Ah, this is better late than never!  I just haven't had time to get this card blogged with my staycation and subsequent daughter's visit to the ER last weekend.  She is doing MUCH better and just has a cough at this point but antibiotics will be in store for quite a few more days.  I've enjoyed all the cuddles and love we've shared!!  Thank you all for the well wishes!!  xoxo

So.....did you see the new Simon Says Stamp This is The Life release from last week?  Lots of new stamps, dies, and stencils.

I played around with a new set called Best Fishes and matching dies.  Can you say CUTE?  I also sponged some Surf Blue Simon Says Stamp ink onto a new Stencil called Waves over a Surf Blue cardstock panel.  I added in a few stamped elements to my fishbowl using Smoke and Orange Peel ink (also from Simon Says Stamp).  I die cut this adorable fish and colored with copics.  My fish was layered behind a clear cardstock "fishbowl".  (I couldn't capture it in the photo).  My sentiment was stamped on vellum and some strips of Orange Peel cardstock which were to ground my fishbowl. 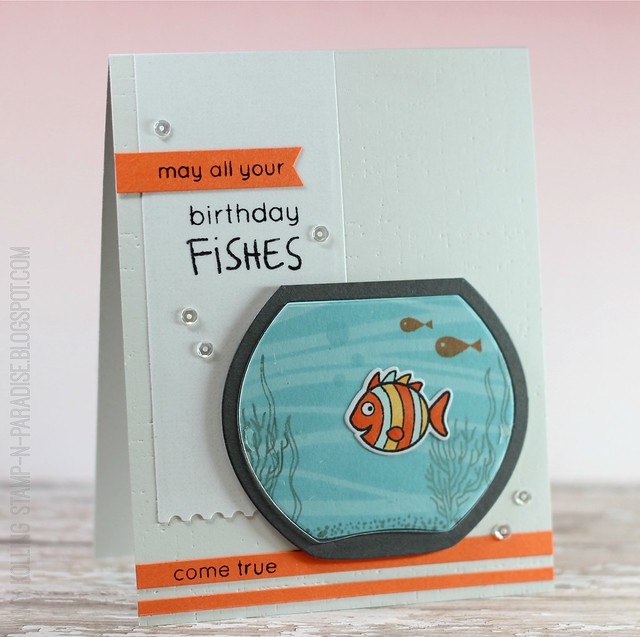 I'm sending this over to the Simon Says Stamp Wednesday Challenge (just under the wire) for their challenge: Let's Be Clear!

That's all for today!  Thanks so much for sharing a part of your day with me!

I'm soooo glad that your girl is doing better! How scary!

Your card is so cute! Love that fish bowl!

this card is adorable..

glad to her that your daughter is doing better..

Amy so glad to hear that Peyton is feeling so much better, so scary! You card is adorable I bet she likes it!

Yay for Peyton, so sorry you guys had to deal with that! I love this card, the waves are so fun!

Scary when the kids are sick; am glad to hear your daughter is feeling much better! Will add her to my prayers.
LOVE this card!! That fishbowl die is just plain fun, not to forget that sweet little fish. Great card. Bev

Totally charming! Those pops of orange are perfect!

I'm so glad all is well.